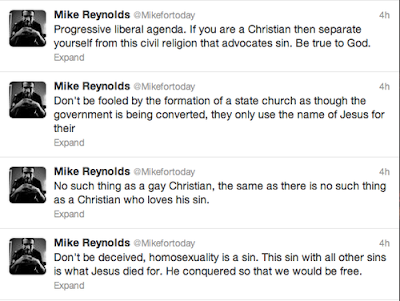 Metal and Christianity are an incongruous pair, a famously anti-authoritarian cult vs. an infamously authoritarian one. Bands like Stryper and Underoath are mocked for their beliefs, while bible-thumpers derided Ozzy enough to inspire two of his most famous songs. But one element that the two unfortunately share, whether you're Dave Mustaine or Pat Robertson, is a history of homophobia.

This month, Christian metalcore band For Today earned some unflattering press after guitarist Mike Reynolds posted the above comments on his Twitter page. The band quickly released a statement that read in part, "Mike Reynolds is no longer a part of For Today. He has decided that now is the time for he and his wife to put their plans in motion to enroll in Bible college, and to begin working toward full-time missions work in the Middle East."

Reynolds has also released a statement, basically a long-winded version of the famous "I'm sorry if I offended anyone but not for what I said" answer. As one could guess, he seems like a lost cause ("I am not isolating homosexuality, but stating that ALL sin must be left behind to follow Jesus") with a lot of repressed emotions, but none of his bigotry is as bothersome as singer Mattie Montgomery's taped apology below.

Mattie seems like an earnest, empathetic guy who wants to make the best of an unenviable situation. But in no instance does he condone Reynolds' remarks. Montgomery's version of the "I'm sorry if you're offended" apology is actually worse, since he seems to have enough sense to know better. Maybe he doesn't want to alienate his brethren, but the best metal bands (and artists in general) don't worry about whom they alienate. If Montgomery is genuinely remorseful for what Reynolds said and not just for people's reactions, he needs to say so.

Montgomery has an opportunity to wipe some of the homophobia stigma that both metal and Christianity suffer from. Regardless of whether you enjoy For Today's music, it would be positively heroic for him to be a visible metalhead speaking out against homophobia. But until then, he's another sheep in a blight on his music and religion.
Posted by Ben Apatoff at 7:10 PM