Start your morning with Meshuggah 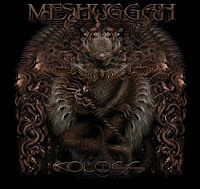 Meshuggah are the only death metal band I can think of whose new albums feel like events. The band usually takes 3-4 years between records and shuns all media in the process, waiting until weeks before each album's release to make an announcement. Consider them death metal's Radiohead.

Timing and mystery aside, new Meshuggah is still worth getting excited about. Each album is a sonic adventure, only promising cinder block riffage and mind-throttling polyrhythms. Probably something about robots, too.

The relatively deliberate pace of "Break Those Bones Whose Sinews Gave It Motion" lets me appreciate everything I admire about Meshuggah. I can't wait to hear the rest of Koloss on March 27.