Today is the fourth anniversary of "Dimebag Darrell" Abbott's death, and I've joined the many tributes that came up today (and have been coming up for the past four years) with a post on Metal Injection. Now, for the more self-indulgent post to go here.

One day in middle school, a friend brought in a copy of Pantera's Vulgar Display of Power. Pantera was a daunting listen, entirely forbidden from the local rock radio stations my friends and I listened to. The reputation of four hard-living, tougher-than-nails rednecks who played louder and faster than Metallica preceded the music, as did that awesome album cover art with a guy getting punched in the face. 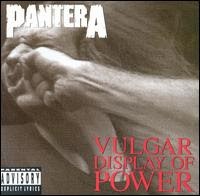 Upon finding the music department's CD player, I did what any red-blooded American middle school boy would do when no teachers were looking. I skipped ahead to the track called "Fucking Hostile."

I feigned toughness, unable to admit that my inner savage was jumping up and down at how awesome this song was. But I learned that extreme music was as thrilling as anything that guitars, bass, drums and vocals could emit. My boyhood hero, Billy Corgan, was certainly onto something when he cited Dimebag as his favorite guitarist.

"Fucking Hostile" was never a single or a music video, but just about anybody who listened to metal in the '90s has been struck by it. Check out cover versions by Anthrax in Peru and In Flames in England--everyone in both crowds knows the words.


Even better, revisit the original (live at Donnington:)


Rest in peace, Dimebag.
Posted by Ben Apatoff at 5:59 PM