Metalheads of the Day: Das Racist

A few years ago, a friend and I caught an underground hip-hop show. The headliners were terrible, but the opening act, a flavorful combination of Cheech and Kumar types that stumbled over each other while playing with all eight members of the crowd ("When I say 'call,' you say 'response!'" Silence.) put on one of the best shows I'd ever seen. They sounded like wasted college kids making up the words to Paul's Boutique. It was Das Racist.

In 2012, Das Racist are big enough to have been on the cover of Spin, but their off-beat, colorful and witty raps still give me a smile. They're also one of the only hip-hop or indie bands I know that can pull off metal tributes without sounding forced or ironic, whether it's performing "Master of Puppets" in concert or giving epitaphs to Ronnie James Dio. Best of all is the shout out in "Rainbow in the Dark," a song that takes its title from the Holy Diver track and acknowledges Dio in the lyrics.

Das Racist's "Rainbow in the Dark" was released a few months before Ronnie James Dio died of stomach cancer in 2010. I don't know if he ever got to hear it, but I'm glad to know that thanks to Das Racist, more people have heard Dio. 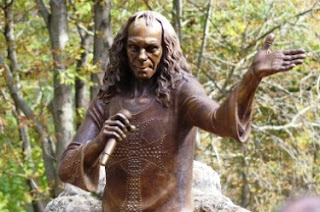