30+ years into one of the most remarkable careers in the history of recorded music, Metallica is still offending more people than any other metal band. At this point, being one of the most popular bands in the world should have rendered them innocuous, but as their headlining spot at Glastonbury this weekend proved, they're still causing more uproars and infuriating more listeners than Watain or Burzum could ever dream of.

I love this t-shirt they sold at the show, honoring the elitists in Mogwai, The Guardian and even Judas Priest, who fumed at the idea of Metallica headlining a hippie-themed festival (front and back image courtesy of Blabbermouth). 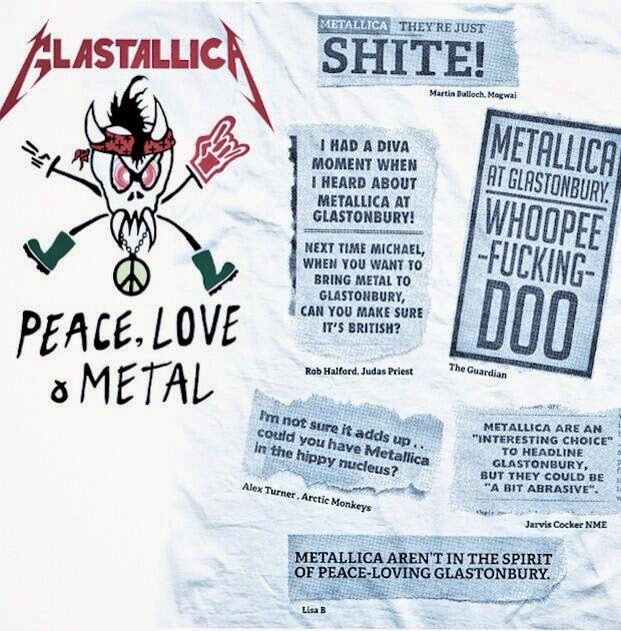 Metallica also addressed a widely-circulated internet petition urging the festival to ditch the band over James Hetfield's choice to narrate a History series on bear hunting. While animal rights activists (who apparently cared more about associating themselves with a high profile event than actually doing anything for animals) got up in arms, Metallica filmed an intro video with Julien Temple (The Great Rock 'n' Roll Swindle, The Filth and the Fury) poking at the controversy. It's pretty silly, but it made me smile to see the band have fun in the face of adversity, even a small one like this.

And of course, the show looks and sounds incredible. What a band.