At age seven, John Lydon contracted spinal meningitis and spent a year in Haringey's St. Ann's Hospital. Nurses injected him with penicillin and used surgical needles to draw fluid from his spine while the boy suffered from nausea, migraines and the knowledge that, were he to make it out of the hospital alive, he'd be right back in impoverished Holloway, fighting off a high crime rate, bullying, canings from his schoolmaster and prejudices against Irish immigrants.

Like many boys, Lydon found much of his solace in cinema. Not escapism, but inspiration. As he remembers in his autobiography No Irish, No Blacks, No Dogs:


"Best of all, I loved the way Laurence Olivier played Richard III. He portrayed the character so utterly vile, it was great. As I said before, Johnny Rotten definitely has tinges of Richard III in him. I saw it a long time before I conceived Rotten. No redeeming qualities. Hunchback, nasty, evil, conniving, selfish. The worst of everything to excess. Olivier made Richard III riveting in his excessive disgust. Having seen it aeons ago, I took influences from Olivier's performance. I had never seen a pop singer present himself quite that way. It wasn't the norm. You're supposed to be a nice pretty boy, sing lovely songs, and coo at the girlies. Richard III would have none of that. He got the girls in other ways."

Deformed, unfinish'd John Lydon could not prove a lover, and thus determined to prove a villain, and hate the idle pleasures of these days. Unwilling to be crippled, Johnny Rotten turned his hunched look into one of the most iconic cultural images of the 20th century. 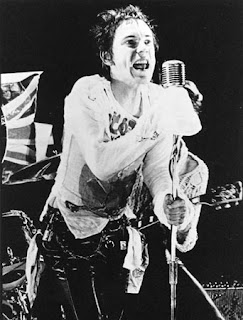 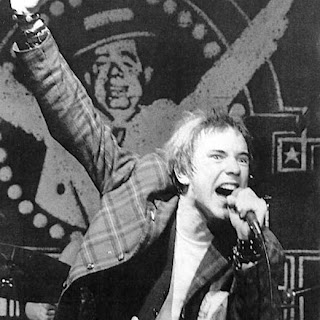 Not long ago, I saw Mudhoney at the Bowery Ballroom. Frontman Mark Arm hammed up the encore by hunching over with a wild-eyed stare, gnashing his teeth and spitting out the words to "Suck You Dry." None of these gestures were acrobatic, yet anyone with a passing interest in punk rock could have told you, "He's imitating Johnny Rotten." Not bad for a sickly boy confined to a metal-framed bed.
Posted by Ben Apatoff at 3:30 AM