Local H are bums. Not the proudly ignorant type of whomever Avril Lavigne is engaged to this week, but somewhere in the 47% of Americans whom Mitt Romney (who appears here, along with Bill O'Reilly and Sarah Palin) thinks get out of paying income taxes. Songwriter Scott Lucas doesn't posture or get on a high horse, but he does still fight for concepts, albums and concept albums on the H's latest, Hallelujah! I'm a Bum. 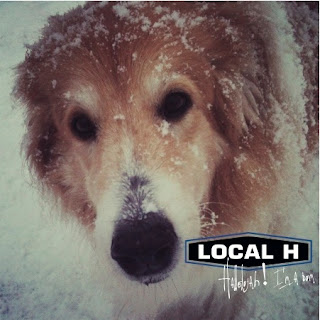 Lucas and drummer Brian St. Clair are still flinging out minimalist riff-rock in the vein of Cheap Trick processed through Mudhoney, but on Hallelujah! I'm a Bum they're sounding more like Titus Andronicus and the Japandroids' ancestors than grunge descendants. The minimal arrangements and violent energy that characterize more recent E Street indie give songs like "Night Fight to Paris," "Cold Manor" and "Feed a Fever" a distinct bite, backed up by Lucas' unstoppable riffage. He's gotten weirder--"Paddy Considine" plays like a Chicago take on Lou Reed's "Good Evening, Mr. Waldheim," and the canine romp "Look Who's Walking on Four Legs Again" almost pretends to pretend to be alt-country. "Here Come Ol' Laptop" drags a horn section into a Stooges-esque grind. A few minute-long transfer tracks help string together a theme about the Chicago "L" train, and references to the 2012 election are abundant ("He says 'Yes, we can'/But we're grains of sand," Lucas bemoans on the record's Townsend-worthy closer, "Waves Again.") Local H don't pretend to have answers, but they also don't have to remind you that they matter.

By the time Local H's next album is out, they'll still be bums, and the Black Keys still won't have any songs as good as these.
Posted by Ben Apatoff at 8:23 AM