What is the secret to Guns N' Roses? 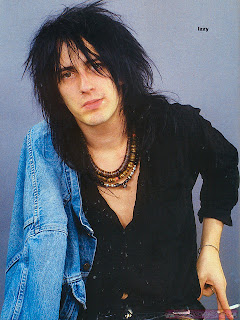 Sure, Axl and Slash are the icons, Duff is the anchor and Steve Adler is the Ringo. But outside of the redhead, Izzy is the best writer. He also was the first to leave the band intentionally, but he left them with one of the best songwriting records in rock history--"Patience," "Think About You," "Pretty Tied Up," "14 Years," "Bad Obssesion" and even "Mr. Brownstone." Want to know how a band with three ex-Gunners could be as boring as Velvet Revolver? Because they don't have Izzy Stradlin.

"Mr. Brownstone" rides a Bo Diddley beat into an enticingly strange riff that sounds even more stoned than its narrator. It's a fabulous blend of the most-copied rhythm in rock music and an otherworldly Stradlin phrase, weirder than anything that The Clash, Stooges, Hüsker Dü or Led Zeppelin ever did with the Diddley measure.

The lyrics are a day-in-the-life-of-GNR story that probably left a few casualties. "Mr. Brownstone" is slang for heroin, although everyone that I've met who knows that learned about it from GNR. The chorus ("I used to do a little but a little wouldn't do it, so the little got more and more/I just keep trying to get a little better, said a little better than before") may be the definitive lyric for anyone who has ever lost self control.

Three years ago, my roommate and I saw a death metal show at Europa, with about five other attendees. The first act, Revocation, were months away from being America's best new metal band, as we learned while watching them honor "Mr. Brownstone" at the tail of their own terrific "Exhumed Identity." Kind of like how Bo Diddley surfaces on Appetite for Destruction.
Posted by Ben Apatoff at 2:50 AM