Song of the Day: Anthrax, "What Doesn't Die"

Anthrax has always had a lot to prove. They're metal's plucky underdogs, a team of New York comic book fans that landed a spot among metal's Bay Area elite in the Big Four. If Metallica, Slayer and Megadeth are the Beatles, Stones and Who, Anthrax are the Kinks.

Never was that underdog status more apparent than in 2001, when post-9/11 anthrax scares whipped up a slew of bad publicity for the band. True to form, the headbanging vets responded like a bunch of mensches. They displayed links to information about the disease on their web site. They played benefit shows for NYPD and FDNY families. Regarding pressure to change their band name, they took the stage dressed like this: 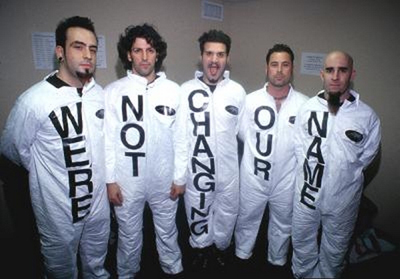 Proving Nietzsche's most overquoted adage, Anthrax roared back with We've Come for You All, their best album to date. The kickoff track, "What Doesn't Die" paid tribute to the band's perseverance. Or maybe it was zombies, as Anthrax's Dawn of the Dead-aping video suggests.

I love the intro--blast beat innovator Charlie Benante and palm muting master Scott Ian are still one of metal's most distinct combos. Rob Caggiano's Dime-worthy solo ain't too shabby either. But the best part of this song is indisputably the false ending. The guitars squeal out while Benante rolls back in, growing like the T-1000 hardening back into human form. John Bush, one of the world's most underrated singers, promises an even heavier finale, and the riffs and zombies pile in for the kill.
Posted by Ben Apatoff at 1:59 AM