Obey Blood for the Master 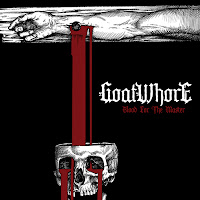 February is designated Black Metal History Month in some circles, an observance of some of the most extreme music ever committed to tape. But rather than dust off my Immortal MP4s, I'm celebrating with the year's best album so far, Goatwhore's masterfully executed Blood for the Master.

On their last release, Carving out the Eyes of God, Goatwhore established themselves as one of the best metal bands on the planet, a black/death metal rarity in two genres that have been exhausted. This time around, they're heavier than ever before, infiltrating an onslaught of blast beats and distortion with some of the tastiest riffs you'll hear all decade.

No death metal or black metal band can thrive on sticking exclusively to the genre anymore, and Goatwhore are keeping the music alive with thrashing, hardcore-based progressions that will take you off the rails and into the pit. Must be the same Louisiana cookin' that gave us Philip Anselmo.