How I learned to stop worrying and love the Deftones

Why didn't anyone tell me how great the Deftones are? Probably because if they had, I would have responded that the Deftones were little more than a shard of respectability in the nu metal cesspool. Then I would have gone on believing that they were not offensive enough for people who take metal seriously. But with their latest album, Diamond Eyes, and some show-stealing performances on two of the best metal tours of the past few years, I can officially say that the Deftones rule.

My biggest charge against the Deftones was that they were bogged down by their artistic pretenses. Philosopher Walter Kaufmann once described Camus as "a nightingale who thought he was an owl," and the hefty, hairy Californians in the Deftones seemed to have the same dilemma. Their catchiest hard rock riffs were drenched with reverb and artsy effects that distracted me from their hooks. They sounded like they were ashamed of their best qualities. Who wants to listen to a metal band that does a Björk impression? If that band is the Deftones, I do.

The Deftones are the only great metal group that sounds like they've never listened to any metal. The band's name reflects guitarist Stephen Carpenter's hip-hop and '50s influences, but Diamond Eyes plays more like a band of shoegazers performing their idea of what all that big bad metal really sounds like. There's little connection to anything you'd read about in the Decibel Hall of Fame, other than being loud. Maybe if Kevin Shields teamed up with Robert Smith and they gave all their songs to Rage Against the Machine, it would sound like this.

I love how the vocal melodies are nothing like the progressions and still complement each other on tape. The guitar tracks remind me the Smashing Pumpkins' dreamy soundscapes, yet they're also as raw as some of the best hardcore punk.

I'm amazed at how the Deftones function as a unit. Abe Cunningham is one of the most understated metal drummers I've ever heard, but he drives every song, punctuating each measure with graceful fills. The keyboards give the songs a glow that precedented artists like Between the Buried and Me. Any band that thinks they need two lead singers should investigate Chino Moreno. These aren't just studio tricks--over the past year and a half, I've seen the Deftones' onstage chemistry go toe-to-toe with Alice in Chains, Mastodon and the Dillinger Escape Plan.

Lately, Diamond Eyes has caused me to re-evaluate Around the Fur and White Pony, which taught me that I was wrong all along. The Deftones are a nightingale and an owl. 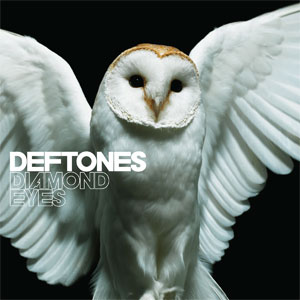