"Metal Up Your Ass" is a popular headbanger chant from the early '80s and an annual death metal fest in Fort Worth. It was also the original name of Metallica's debut album. 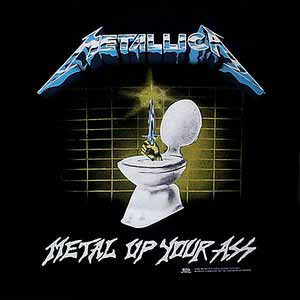 Almost out of their teens, the four members of Metallica were writing, raw, relentlessly fast and aggressive thrash metal that was about to change a lot of lives. Independent metal label Megaforce picked them up, and Metallica recorded ten amazing songs for their debut album. However, before they unleashed the greatest parent-offender of 1983, Megaforce's executives balked at the album's title and cover art.

Metallica were not happy about this. "We should just kill 'em all," suggested bassist Cliff Burton in response to the label's concerns. His idea was never carried out, but it did serve the band with a new album title. 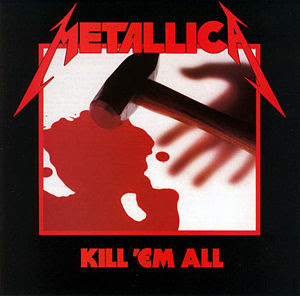 Artistic freedom is dangerous. Bands should be allowed to make the music that they want to make, but Metal Up Your Ass is a good argument against Metallica's autonomy. I laugh inside whenever I hear the phrase or see that picture of a dagger in a toilet bowl, but that's not the sort of reaction I want from hearing Metallica. The music on Kill 'Em All speaks volumes, but it would be difficult to take any of it seriously under a name like Metal Up Your Ass.

Such a title is more in line with metal bands that Metallica were distinguishing themselves from. Thanks to their musical proficiency, reality-inspired lyrics and punk rock sensibilities, Metallica were translating metal into something to be taken much more seriously than Venom or Mötley Crüe. This is not a process that would've been aided by naming their first album Metal Up Your Ass. They may as well have been wearing makeup and teasing their hair.

Officially releasing Metal Up Your Ass would not have prevented Metallica from being one of American music's greatest claims. But they may not have changed rock music as effectively as they did. I'm staunchly pro-artist when it comes to creative freedom and censorship issues, but I'm also very glad that I don't have to defend my favorite metal band for introducing themselves with Metal Up Your Ass.
Posted by Ben Apatoff at 9:45 AM