The trouble with Chuck Klosterman readers 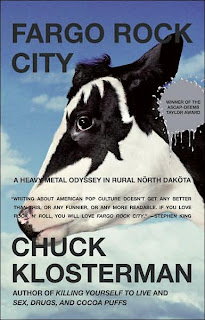 It's hard for me to understand why Chuck Klosterman is such a polarizing figure. Sure, disagreeing with his opinions, having no interest in late '80s/early '90s pop culture and lacking patience for his quips are understandable. But whatever the case, Klosterman offers a fresh set of beliefs from the general Rolling Stone/Pitchfork-dominated media, provides relatively ego-free narration and can be funny without getting off topic. His columns are almost always worth checking out, and I'll defend him at length from his detractors, but I'm also a little bothered by the positive reception he gets.

Hearing people applaud Klosterman's analyses (which range from the Boston Celtics to Saved by the Bell, but are rooted in bands like Van Halen and Mötley Crüe) is a little like hearing people fawn over Joyce Carol Oates for writing about boxing. Once a noted intellectual takes a look at a supposedly lowbrow subject, critics gush about how such a great mind can find depth in something like metal, comic books, sports or horror movies. In truth, all of those subjects have thoughtful, intelligent fanbases, including people like Klosterman who understand why David Lee Roth and Axl Rose are important. Not all of such fans are given the sort of public forum that Klosterman gets, but in general people's reasons for enjoying Guns N' Roses are as smart as those for liking Radiohead. I'm guessing that it wasn't Klosterman's idea to subtitle one of his books A Low Culture Manifesto, but that title reflects the way that most people seem to view his subject matter.

Self-important critics who don't get metal assume that they're too enlightened to enjoy it, or worse, that they appreciate it ironically for its camp value. This is clearly and unreasonably elitist--as much as I don't get why Kenny Chesney sells out arenas, I'm sure that his fans have perfectly good reasons for supporting him, as do folks who enjoy T-Pain or Sufjan Stevens. None of those artists are "low culture," just different options for music lovers.

On the opposite end are those who assume that Klosterman likes stuff because it's lowbrow. A few years ago, fuming bloggers chastised Klosterman for being unenthusiastic about the buildup for Snakes on a Plane (before anyone had seen it.) Perhaps most scathing was the Gawker piece Asshole Whose Entire Career Based On Appreciating The Lowbrow Wants To Pull Up The Ladder, which was aghast that a guy who enjoyed some mediocre art didn't appreciate all mediocre art. But assuming that Klosterman likes stuff because it's bad is just as fallacious as assuming that he's the only smart guy to like this stuff. Is it inconceivable that he's an individual who likes art that specifically appeals to him? Apparently so.
Posted by Ben Apatoff at 2:31 PM