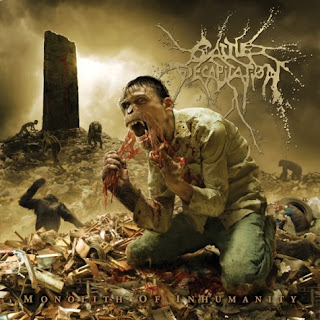 Cattle Decapitation might be the grossest band in the world. Some of their album covers and song titles almost make my stomach turn, and this is exactly what they're trying to do. GWAR isn't nearly as sickening--for all their extremities, at heart they're here to make people laugh. But Cattle Decapitation are metal's Upton Sinclair, promoting vegetarianism by painting the most disgusting picture of the meat packing industry that I can stand. Unlike Sinclair, this is the band's goal.

So why listen? Because their music, a weird blend of deathgrind and hummability, will have your pinky and index finger raised in joy while your head quickly and repeatedly nods approval. I'm really enjoying the tempo shifts, jazzy interlude and Josh Elmore's classic rock solo on the new "Lifestalker," off their upcoming album Monolith of Humanity. It's more melodic than their earlier releases, but singer Travis Ryan still hocks up enough to remind you who you're listening to. If the rest of Monolith of Humanity is as good as this and the first preview ("A Living, Breathing Piece of Defecating Meat,") it'll be their best release yet. If not, it'll still be a treat. I can't wait to find out.

The guitarist for Cattle Decapitation is Josh Elmore, not John.

Good catch! Thanks for reading.