In a just world, Daikaiju would be playing packed stadiums. But as long as life isn't fair, dive bars like Hank's Saloon are perfect for their interactive, kabuki-inspired performances. 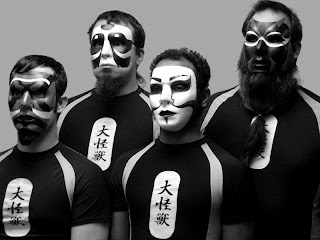 Last Tuesday, four masked men ran into the bar, grabbed some instruments and blazed through an hour-long set of surf rock from outer space. In the flesh, the songs took a more frantic pace, with their instrumentals running closer to mathcore than the '50s Sci Fi scores that their titles ("Escape from Nebula M Spacehunter," "Attack of the Crab Women," "Sharkakhan") suggest. Combining the spontaneity of the Giraffes and the theatrics of Sleepytime Gorilla Museum, Daikaiju's two nimble guitarists darted through the audience, messing with everyone in range via antics that recalled the Joker's henchmen.

Never have I seen a band so actively engage a crowd without saying a word. They monitored the room's applause and enthusiasm through hand signals, insisted that we all take turns with their whammy bars and snuck up on anyone who looked distracted. If you were holding a beer, you learned to not stand too close.

For all the excitement, no one lost track of how muscular Daikaiju's tunes are. The complicated, infectious melodies of songs like "Laser Runner" and "Flight of the Garuda" imagined Dick Dale as Greg Ginn in the Mars Volta, blending the sensibilities of rock's pioneers with a modern ferocity. Daikaiju's chops are impressive on record, but watching them maintain that tightness at a new speed while dancing with lucky patrons was staggering. Check out their tour dates and go.

Openers God's Green Earth showed up late and sounded like GWAR parodying the Melvins, except not funny.
Posted by Ben Apatoff at 12:30 AM