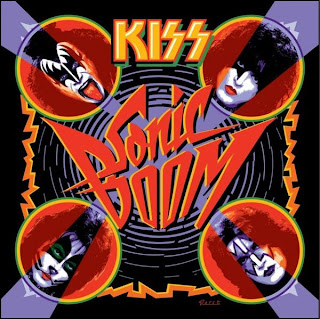 Forget that you're sick of Gene Simmons. Forget that there are two new guys in the band with faces painted to look like the original members. Forget that they put on one of the best rock shows in history, that they're music legends and that this reviewer is a Gene-for-Halloween KISStian who still wears a KISS tie to weddings. Focusing solely on the music, Sonic Boom is still a worthless waste of Wal-Mart space.

It's got the musical simplicity of their classics with none of the hooks. First single "Modern Day Delilah" is even more forgettable than "Psycho Circus," "Never Enough" sums up the KISS philosophy over music that rips off both Ozzy and Poison, and "When Lightning Strikes" confirms Tommy Thayer as a perfectly competent studio musician who can't fill the shoes of Space-Ace. Oh yeah, it's also one of the most tolerable songs on the album.

Live, KISS may be the greatest nostalgia band in the world, and that's partly because they don't play songs like "Danger Us." Wal-Mart is going to push this record to gold sales, but completists are advised to wait. You'll have the rest of your life to find copies of Sonic Boom in used CD store bargain boxes.