Black Dahlia's in my head 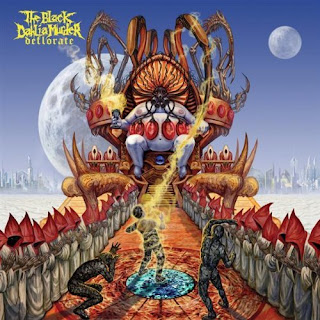 The Black Dahlia Murder always seem like they want to do to your eardrums what that guy they never caught did to Elizabeth Short. On Deflorate, they've honed their ambitions a bit, zeroing in on their ability to craft a tune that sounds more like it crept out of Sweden than Detroit. Anybody who made up their mind about BDM on Nocturnal isn't going to leave Deflorate with a different point of view, but for those who've never figured out where to the start with this band, songs like first single "Necropolis" and opener "Black Valor" are worthy, if not quite up to the hype.

The players are all incredible. Ex-Aris guitarist Ryan Knight can suffocate most bands with his chops but seams nicely here, drummer Shannon Lucas is better utilized than he ever was in All That Remains and singer Trevor Strnad's distinct shriek that will impress your older brother who thinks death growls are the demise of metal. These performances mostly pay off, with "Christ Deformed" being catchy enough (but still too fierce) to be metalcore and the aforementioned "Necropolis" taking the band's usual minor scales to a more brutal dimension. There's not much diversity, although "A Selection Unnatural" pulls off a better hardcore track than anything Hatebreed ever managed.

Like too many death metal albums, Deflorate is unfortunately frontloaded, and the album's second half blurs into proficient death sameness until "I Will Return," which follows a thrashy guitar line into a whiplash-inducing conclusion. BDM still aren't death metal savior that the suffering genre desperately needs, but it's fun to hear them try.