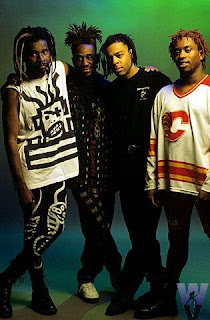 'Cult of Personality' is a very well-known song and by far the most famous thing that Living Colour ever recorded, but the band is still very underrated. Living Colour were fantastic musicians, especially lead guitarist Vernon Reid; whose virtuoso jazz and funk sensibilities were a breath of fresh air in the stale world of hard rock in 1988. Matched with singer/actor Corey Glover, whom Reid discovered at a party where he was impressed with Glover's rendition of 'Happy Birthday,' Living Colour were one of the most exciting hard rock/metal bands of the late '80s. No less an avid fan than Sir Mick Jagger produced and sang on their debut album, Vivid.

Lyrically, 'Cult of Personality' is not a great song. It's mainly here for how it feels. The performance, hook, and chorus rock so much that it'll make you want to throw bricks through the windows of the White House, and it's amazing that the most time-worn quotes from Malcolm X, Franklin Roosevelt, and JFK (all featured here) feel so edgy when set to such rockin' music. The fact that a band could sample "Ask not what your country..." and not come across as really pretentious is all the more amazing.

Part of what makes the song so self-empowering is the way that it addresses the whole 'if the people lead, the leaders will follow' philosophy. While calling out renowned cult of personalities ("Like Mussolini...and Kennedy"), Living Colour make it clear that the people, whether through democracy or complacency, allow this to happen. In the pulverizing final verse, Glover really lets us have it.

Living Colour's need to get political eventually did them in aesthetically and commercially. Noted fan Chuck Klosterman wrote that Living Colour seemed "ashamed of being a metal band," which is in part true. Like the comedian who struggles to take on dramatic roles because he feels he isn't taken seriously, Living Colour were smart guys who overlooked their platinum records and critical acclaim to conclude that they weren't making relevant music. By the time that they released an industrial-tinged record with a woman captured in a brank on the album cover, much of the world had turned the other way. Since then, Reid's jazz fusion projects have rightfully well-received, and Living Colour reunite and tour every now and then. I bet that they're a killer live act.

It's unfortunate that 'Cult of Personality' remains Living Colour's only really big hit, but whenever I want to show someone what a great band they are, this is the song that I play.
Posted by Ben Apatoff at 9:56 AM

you should check out Living Colour's official myspace : http://www.myspace.com/livingcolourmusic

They've got all of their video's in their video section and some live stuff too.