In the spirit of 2008, here's to a paramount moment in political metal. 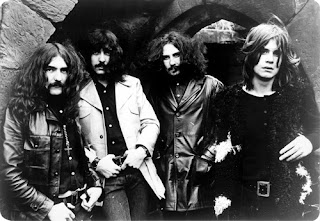 Ever the metal prototypes, Black Sabbath were also the first metal band to make a significant political metal song. Alarmingly heavy for a song recorded in 1970, 'War Pigs' was considered so shocking upon its release that Black Sabbath's record label, fearing protests from pro-war audiences, refused to let the band them name their album after it.

Black Sabbath really outdid themselves on 'War Pigs,' which featured Tony Iommi's finest guitarwork and Ozzy Osbourne's greatest singing to date. The melodic, minor-scale intro is featured over the eerie sound of sirens, and it all gives way to some mighty Sabbath riffing and Ozzy wailing.

"Generals gathered in their masses/Just like witches at black masses," goes the famous opening line, which sounds so cool that people ignore how pathetic the attempted rhyme is. But the song really picks up on the chorus:

"Politicians hide themselves away
They only started the war
Why should they go out to fight?
They leave that role to the poor"

"Time will tell on their power minds
Making war just for fun
Treating people just like pawns in chess
Wait 'til their judgment day comes, yeah!"

Working-class Ozzy certainly identified with the idea of the poor being sent to do the bigwigs' dirty work, and his distrust of authority and sense of anti-establishment ran much deeper than San Francisco hippies singing about flowers. His "Wait 'til their judgment day comes" warning, like Bob Dylan's 'Masters of War,' turns religion against the right to a terrific effect, and he couples his political mindset with metal's classic horror imagery (invented by Black Sabbath, of course) in the final verse. Ozzy belts it out:

"Day of judgment, god is calling
On their knees, the war pigs crawling
Begging mercy for their sins
Satan, laughing, spreads his wings"

'War Pigs' was so ahead of its time, it took nearly 20 years for people to realize what a great idea it was to confront the bad guys over what my Dad calls "yeller music." When Faith No More covered 'War Pigs' in in 1989, Black Sabbath was considered fairly passé, but the song has since been covered by the Dresden Dolls, Cypress Hill, the Flaming Lips, Gov't Mule, and many others. When Ozzy and/or Black Sabbath perform the song nowadays, they show images of our current president on the concert screen, and I've been hard-pressed to attend an anti-war rally that doesn't have someone blarring 'War Pigs' out of a boom box.